More explorations of outer space by the spokesman for the space age.

When Walt Whitman wrote, "I am vast; I contain multitudes," he could have been channeling Sun Ra. The man born Herman Blount in Alabama, who claimed he was from Saturn, was equally at home reviving Fletcher Henderson compositions based on their original arrangements or unleashing totally free-form, athematic group improvisation - and many styles in between. It was practically a given that a New York-based (as he was in the '60s) avant-jazz performer as colorful and eccentric as Sun Ra would end up on ESP-Disk'.

The 1965 sessions that produced the two volumes of Heliocentric Worlds came during the most extremely free-form period of Ra's career, contemporaneous with The Magic City (Saturn Records). Volume 1, recorded in April with an 11-member band, consisted of seven relatively short tracks (none over eight minutes); recorded in November with an octet, Volume 2, in contrast, was much freer and featured the side-long "The Sun Myth" (over 17 minutes in length) and "Cosmic Chaos" (14+). The horn players and bassist Ronnie Boykins have plenty of room to stretch out and take full advantage. "A House of Beauty" offers five minutes of relatively lyrical respite between the other tracks.

It's worth getting the vinyl LP of Volume 2 just for the iconic cover designed by Paul Frick, consisting of a German astronomical chart of the solar system and portraits of Sun Ra and famous astronomers.

2.A House Of Beauty

"Jazz keyboardist, bandleader, and space cartologist Sun Ra (born Herman Blount) spent most of his career as the consummate outsider. He declared that he was from Saturn (by way of Birmingham, Alabama), lived communally with his ensemble the Arkestra, and was far more interested in cosmic esoterica than what his contemporaries were doing. Ra released most of his several dozen records of the '60s on his own El Saturn imprint (and mostly just sold them at his shows), but the two Heliocentric Worlds albums, both recorded in 1965, appeared on the iconoclastic ESP-Disk label, and propagated his music to a wider audience of listeners who were open to freakiness. Both volumes are improvisations by subgroups of the Arkestra (directed by Ra), and even at their most dissonant, they're playful and spacious — 'Dancing in the Sun' is off-the-cuff big-band swing, and 'The Sun Myth' is a panoramic 18-minute fantasia in which two or three instruments at a time toss long, buzzing tones and high honks back and forth, then fall out of orbit again." - Douglas Wolk, #9 (in tandem with Vol. 1) on Spin's "The Top 100 Alternative Albums of the 1960s"

"Although the 'Vol. 2' in the title insinuates some degree of continuity with its predecessor, this is a bit of a misnomer as the only acknowledged connection with The Heliocentric Worlds of Sun Ra, Vol. 1 (the volume number only indicating the order in which they were issued). Due in part to the wider exposure and distribution of the ESP label, enthusiasts and critics were unanimous in their recognition of this masterpiece of free jazz -- or, as Ra called it, 'space jazz.' The Heliocentric Worlds of Sun Ra, Vol. 2 is comprised of three unique compositions: 'The Sun Myth,' 'A House of Beauty,' and 'Cosmic Chaos.' Sun Ra's work with an ensemble often presents a stated emphasis on the percussive nature of solos as well as within the group context. The underlying freeform anti-structure allows defining contrasts that ultimately establish the progressing sonic sculpture. 'The Sun Myth' showcases Ra's definitive capabilities to guide his assembled musicians from anywhere within said group. He is heard on this recording initiating improvisational exchanges on tuned bongos -- for a portion of the track -- rather than from his customary keyboards. The resulting interactions include mesmerizing bass solos from Ronnie Boykins as well as some impassioned alto sax work from Marshall Allen. Directly contrasting the works that surround it is 'A House of Beauty.' The emphasis shifts, juxtaposing Allen's unfettered piccolo solos with Ra on piano and Robert Cumming on bass clarinet. Of particular note here are Ra's achingly lyrical piano runs and chord progressions, which weave between the light percussion beds and the dominant woodwind section. 'Cosmic Chaos' is the final and most archetypal of the ensemble works that Ra and his various Arkestras would produce throughout the '60s. The extended piece begins with rush upon rush of aggressive counterpoint, building into unreserved group crescendos that are likewise punctuated by various woodwind soloists. - Lindsay Planer, All Music Guide 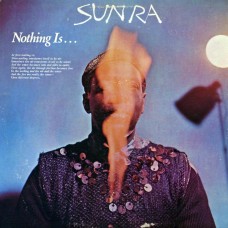