The second album by this all-star quartet – both on ESP-Disk' – was recorded over two sets mixing planned and freely improvised music. It is a cry of frustration, but also determination and celebration. Frustration with the state of our country, determination to do something about it, and celebration of the power and joy of spontaneous creativity.

There are so many things contributing to this album’s joyousness in the face of adversity: the funky grooves that Morris and Nicholson sometimes lock into; the sonic derring-do of Newsome; the breath-of-life singing of Victor that balances radical and traditional, naturalness and craft. Most of all, the way the players’ talents mesh into a greater whole. As Brad Cohan of JazzTimes said, “The supergroup that the improviser/lyricist calls SoundNoiseFunk…is entirely deserving of its name…their red-hot chemistry is evident from the get-go.  On Wet Robots, Fay Victor’s SoundNoiseFunk sound extraordinarily alive indeed.”

Recorded in concert at Firehouse 12 in New Haven on October 25, 2019. Recorded, mixed, and mastered by Greg DiCrosta. Produced by Steve Holtje.

“Singer Fay Victor is the solution to so many “What is the role of the singer in jazz today?” puzzles. The role, Victor proves throughout Wet Robots, is anything at all, anything the imagination allows. … Victor is at another level of freedom and daring and creativity. Sure, this kind of music is at the arty margin, but Victor proves that this kind of abstract singing is also flesh and blood and heart and earth.” – Will Layman, Popmatters (8/10)

“This record stands out from the usual free jazz gestures and credit belongs to Victor. It’s not just that this is her band, but her unique singing concept leads the way. She has a familiar toolbox of vocal sounds, but it’s the way she uses her notes that matter—she has exceptional intonation and it sounds like it comes effortlessly, so she improvises with pitches and melodically logical and coherent tonal phrases. On top of that, she manages the challenging high-wire act of improvising text while always keeping it interesting and fresh. It’s a measure of a first-rate intelligence— take that F. Scott Fitzgerald.…As abstract as most of this is, the earth of the blues comes through almost every track, often with power…”
– George Grella, New York City Jazz Record 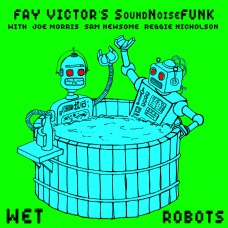 "Few vocalists have the sh..